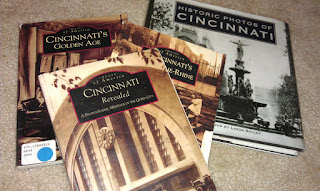 It was suggested that visitors would like to know this histories behind some of the buildings, or the signs themselves, featured here.  Hell, I'm curious myself, but was reluctant to invest that much time in research.
But, what the hell.  Beats drinking one's self to death.
I checked out these books, as a first step.  And while they were fascinating, they weren't all that helpful. There are dozens of pictures of faded signs, (pre-fade).  But, unfortunately, there are a couple of problems: Some of the best photos of wall advertisements are not labeled with location, and aren't easily identifiable.  And many of the buildings have been torn down.
To provide an example, I did some cross-referencing with Google Maps/Street View.  There was a photo of Findlay Market with a wall ad in the background.  And no matter which angle I looked from, that wall doesn't exist.  The building doesn't exist.
There was one on Elm, behind Crosley Square; completely painted over.
About the closest I came to actually learning something was there was a cigar factory here called "Ibold".  I've seen a couple of cigar ads that obviously say "bold", and I'm seeing a connection.


But, ever onward.  There are still more books.
Posted by Gassyknoll at 9:14 AM No comments:

Email ThisBlogThis!Share to TwitterShare to FacebookShare to Pinterest
Labels: tobacco 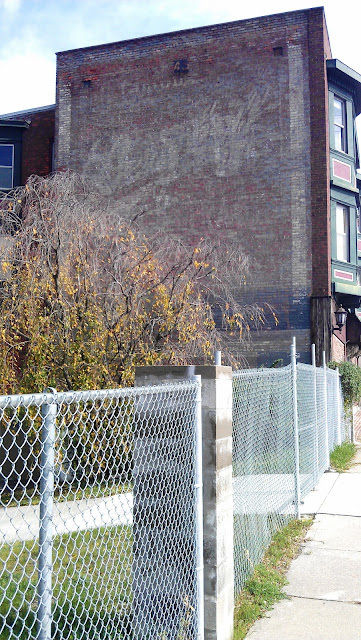 On McMillian, half a block past the ramp to NB I-71. 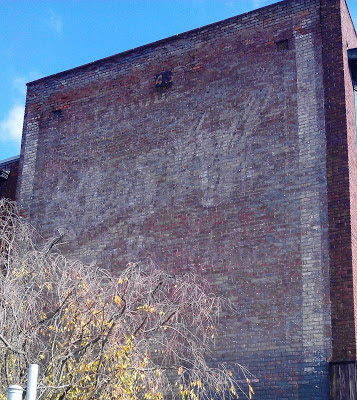 I saw this Wednesday, as I was getting on the Interstate.  The sun hit it just right, and I thought about it for two days before I could back to the neighborhood for these photos.
I felt a little stupid about not seeing it before, but, I shouldn't.  I'm pretty sure there were trees, and maybe a billboard blocking it.
What does it say?  It kind of looks like Schlitz to me, but with something else painted over it.

Posted by Gassyknoll at 7:47 PM No comments: 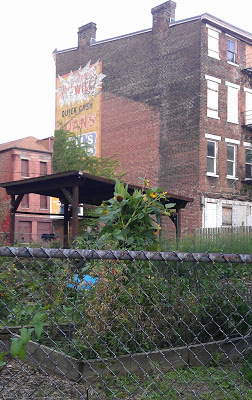 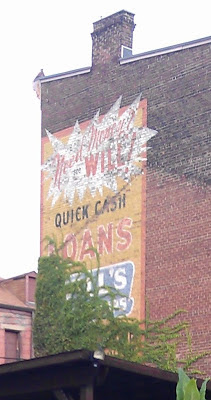 See Will!
On McMicken, east of Vine.
Posted by Gassyknoll at 11:27 AM No comments: 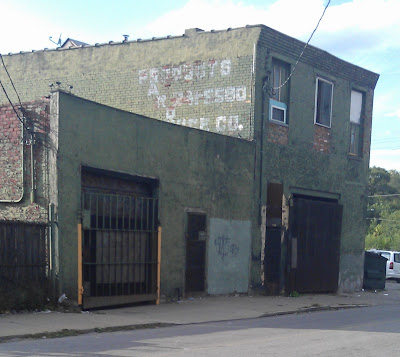 In what "polite folk" might refer to as no-man's land, west of Central Parkway, and north of Liberty.  There's several faded signs on buildings in a 3 block area.  Of the one's I saw, this building looks to be the only one with any kind of activity in it.
It's really an interesting neighborhood: there's a handful of abandoned factory/warehouse types, a few small residential structures, and quite a few empty lots.  All the vegetation gives one the impression that you're much farther than 1.5 miles from Downtown Cincinnati.  It was serene, actually.
And for the life of me, I have no idea what that once said.  Freddy's?  Expresso?  Race Co.?

Posted by Gassyknoll at 11:03 PM No comments: 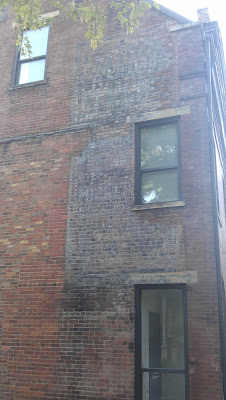 The east side of a building on Riverside Drive which has a faded sign on its west side.  The west side is a little easier to see, but it's also covered by a tree. There's also indications there was something painted on the south side.  It now houses a law office, but I'm guessing it may have once been home to some sort of shipping business, given its proximity to the Ohio River.

Posted by Gassyknoll at 8:44 AM No comments: 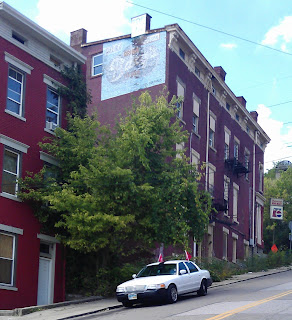 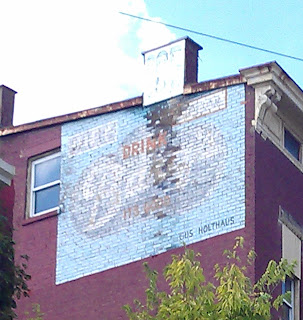 As Visualingual points out, it's not his first appearance here.  We've seen his work Downtown.  And as a matter of fact, there's a few I may have to revisit in person, to get a better look for his "signature".

Posted by Gassyknoll at 10:09 AM No comments: 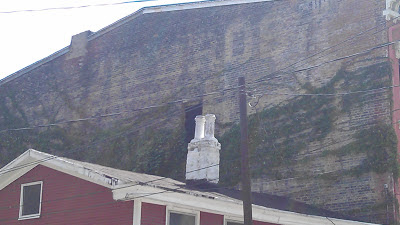 I put off posting this for a while.  Not because it's a lousy picture, but because I couldn't remember where I took it.  This neighborhood has some good examples, overall.  This is one of the weaker ones.
If you want to see the better ones, click on the "Lower Price Hill" below.  I've expanded the Labels to cover some categories other than neighborhood, and made a couple of corrections.  There were several signs listed as Queensgate, when technically, they're in LPH.  Still a work in progress.  Oh, and I think the new look/darker background makes the photos pop a little bit more, don't you?

Posted by Gassyknoll at 2:43 PM No comments: 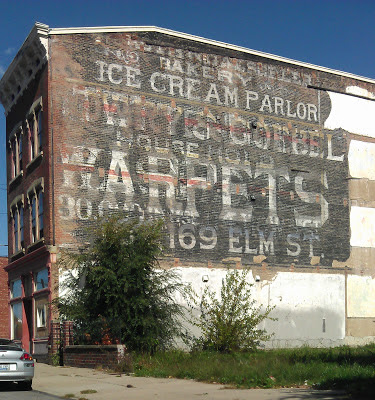 Here I was this morning, thinking about dropping this whole thing.  (See previous post.)
And then, hours later, in the West End, not even looking for old signs, I find this gem, and a couple of previously undiscovered others.  Gonna take it as a sign to keep posting.
Why do this in the first place?  Besides the fact that it gives me something to do besides drink myself to death?  I like it.  I like these signs.  It is art, even if it was never meant to be.  Look at the layers on this particular entry: carpets, ice cream, household goods, bakery?  I just think it's beautiful.
And I love the historical aspect too: What was this (or any) neighborhood like when these signs were painted?  For instance, this one, along the 8th Street Viaduct in Queengate.  Right now, it's next to a viaduct, surrounded by brownfields, train tracks, and the Cincinnati Police Academy.  But, at one time, things must have been quite different.  Or like today's entry, on Freeman, near Dayton; not much seems to happen here now, but at one point, Freeman must have been a bustling thoroughfare.
Beyond that, this blog doesn't get a lot of attention, and that's okay.  I'm not doing it for fame, or money, (obviously).  I'm doing it because I like it.  Finding faded signs brings me a small measure of joy. 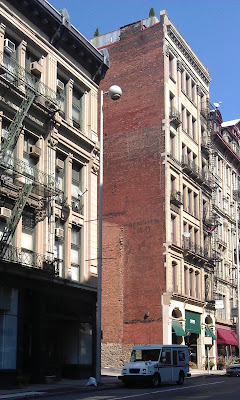 Fourth Street, view from the west, from Central Avenue.
On another note, I just found another, similar blog, with a similar title, oddly enough.  Only Frank's, like the local Visualingual, seems to be successful.  Granted, I've always done this just for my own edification, but, until recently, I figured I was the only person who appreciated this sort of thing, and felt a certain amount of pride about that.  But, hell, my photos aren't even very good.
Basically, I done thought I was sailing uncharted waters, when actually, I've been peeing in the kiddie pool. 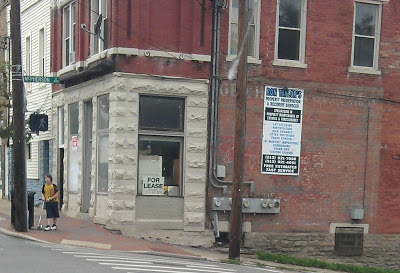 Posted by Gassyknoll at 11:18 AM No comments: 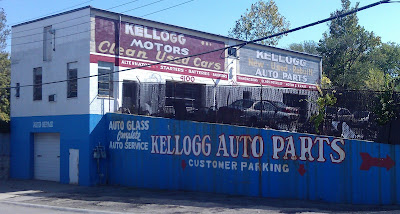 Yes, Kellogg Auto Parts/Motors is still open for business.  However, if you look closely, in the upper left hand corner of the red sign, you'll see something bleeding through.  "JO"  What did it used to say?  John?  Jones?

Posted by Gassyknoll at 12:28 PM No comments: 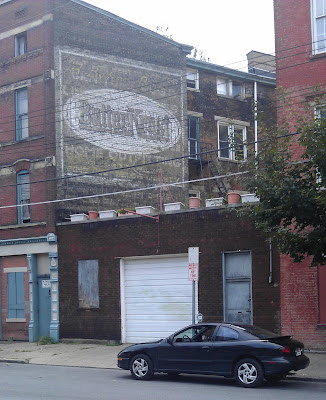 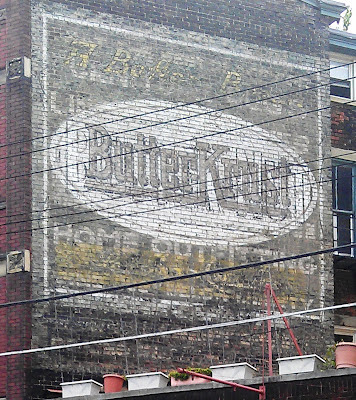 Posted by Gassyknoll at 4:17 PM No comments: 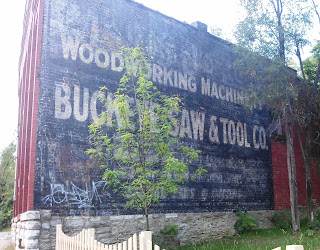 I've been eyeballing this for a while, on upper McMicken, and it finally dawned on me that I hadn't snap-shotted it.  Probably because the first time I saw it, the sun was setting behind it, and it was too dark.  After that, I think I just naturally assumed I'd already gotten it.  Maybe I have.  I can't find it in my records though.  (It's across the street from the Mockbee Building.)

Posted by Gassyknoll at 9:19 PM No comments:

Email ThisBlogThis!Share to TwitterShare to FacebookShare to Pinterest
Labels: Fairview 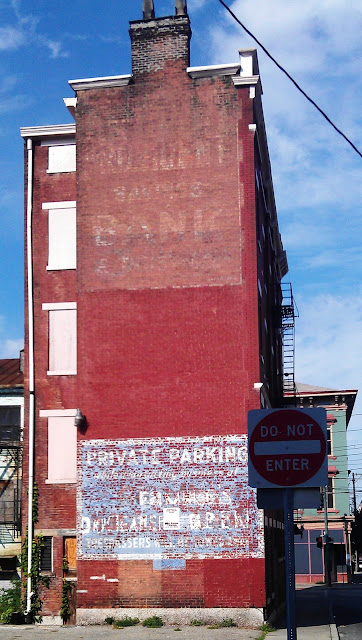 Posted by Gassyknoll at 9:27 PM No comments: 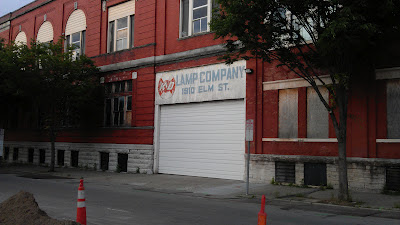 After having our mind blown from that last entry, we needed yesterday to recover.  We're still not back up to snuff, so here's something pedestrian and outside the usual parameters.

Posted by Gassyknoll at 8:31 AM No comments:

Heard a story on WVXU about UC scanning old photos of Cincinnati, and posting them online.  And I went to look.  And I found a classic photo of a wall ad, pre-fade. 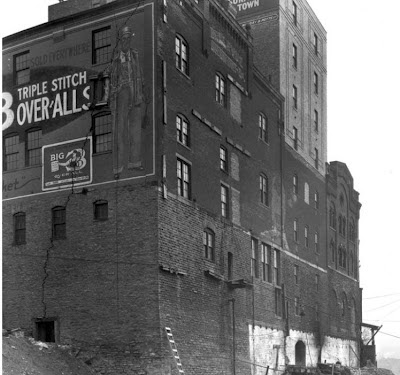 But then, I started looking at the structure, and I realized I knew what it was: The Mockbee Building, on Central Parkway. 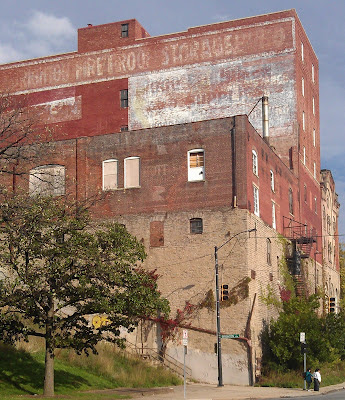 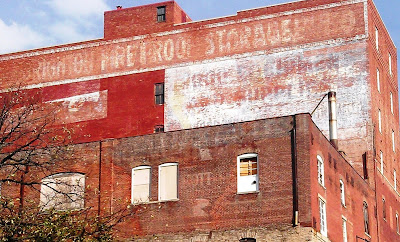 And then I took a closer look, and realized something was missing between then and today.  AN ENTIRE FLOOR was chopped off the top of the west side.  Who does that?!?
There is/was a nightclub/art gallery/hipster event hall inside, called fittingly The Mockbee, but it does not appear to be operational.  Other than a company with the same name that sells fasteners and joints and stuff, in Northside, I've been able to find out zip about this place.  I was hoping Queen City Tour would have sumptin.
Posted by Gassyknoll at 9:49 AM 5 comments:

Gassyknoll
I'm shooting with either a Droid, or a 10 year old Olympus digital. I'm not a great photographer. I'm not an artist, or a architect, or an advertising buff. I'm not poetic, or deep. I just like looking up.